Back to all posts

Everyone talks about the commercials when it comes to the Super Bowl. Within seconds of the commercial appearing on TV, bloggers were evaluating ads and top 5 lists were already appearing soon after game’s end. What I found to be the biggest win of the night was the agile nature of not only what Oreo did when the lights went out, but also how Social Media Marketing can be best used in real time.

For those of you that missed it, the game was halted for 34 minutes shortly after Jacoby Jones returned the opening kickoff of the second half for a 108-yard touchdown. The lights went out and only auxillary power kept the stadium from being totally blacked-out.  many of us turning to our mobiles to entertain us. Those of us that have been following Oreo saw this picture shared. 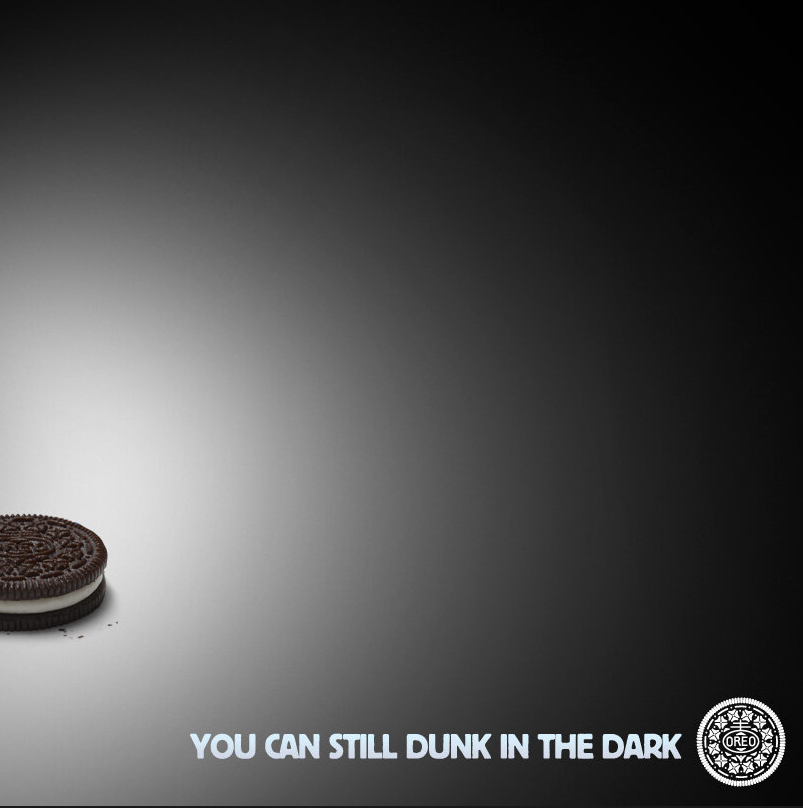 What a clever use of real time engagement to make a brand feel less like a brand and well … more like a person. This at a time when Adobe has identifed that “… users turn to mobile video twice as often during a major sporting event than a typical day”.

For those of you not following Oreo on Facebook over this last year, they have been killing it. Often cited as an example of top-notch Social Media Marketing, Oreo has done their best to bring their community what they want: entertainment. From their referencing the Mars Rover, to supporting Talk like a Pirate Day, entertaniment has been front and center for Oreo.Face it, most of the studies and logic show that people come to social media to get something of value and entertainment is pretty valuable. Either we don’t want to buy something, much to the chagrin of F-commerce proponents, myself included, or no one has cracked the code on how to really sell direct to people online.

How does a brand pull off such a big win?

“The Oreo graphic was “designed, captioned and approved within minutes,” according to Sarah Hofstetter, president of the cookie brand’s digital agency of record, Dentsu-owned 360i. All the decisions were made in real time quickly because marketers and agency members were sitting together at a “mission control” center, or a social-media war room of sorts, at the agency’s headquarters in the TriBeCa neighborhood of Manhattan. Among those who were there were two brand team members from Oreo, and nearly a dozen creatives, strategists, community managers and social-media listeners. via Ad Age

I won’t jump into the debate about the ROI of Social Media, but I have to admit that I was amused by Oreo, and shared it by word of mouth with the 6 other adults in the room. I’d also like to mention that the brownies on the dessert table used crushed Oreo cookies as an ingredient, which was also a topic of conversation. I’d say that it was a Super Bowl Win for Oreos!